The last attempt at a comprehensive epigraphic collection for ancient Sicily was the combined work for the Sicilian volumes of Inscriptiones Graecae (volume 14, G. Kaibel, 1890) and the Corpus Inscriptionum Latinarum (volume 10.2, T. Mommsen, 1883); although these only addressed the Greek and Latin material then known for the island. Modern archaeology on the island effectively began in the same decade, and the volume of epigraphic material on stone alone has increased by at least a factor of three since then. 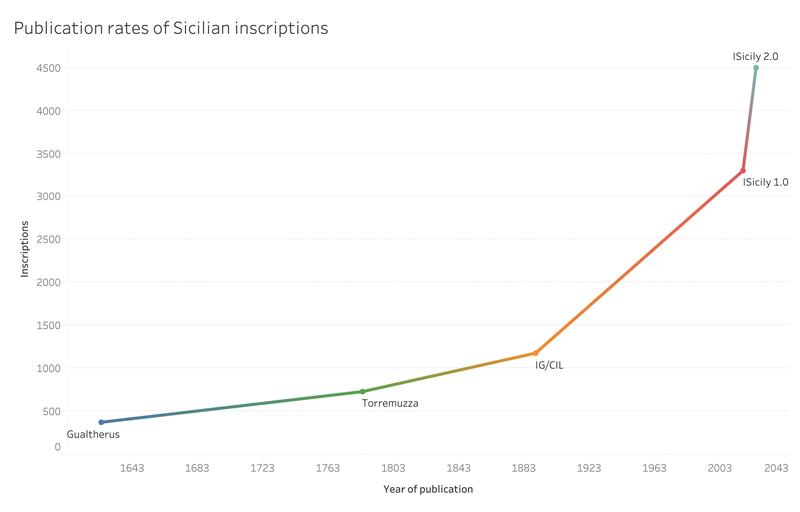 Since then, a number of individual museum catalogues have been published, but the vast majority of the published material is scattered across diverse and often very inaccesible specialist publications. At the same time, it is generally recognised that a comprehensive corpus is a necessary foundation for any systematic study of the epigraphic material, whether linguistic, historical or archaeological. The I.Sicily project was initiated in 2013 in order to address this need. A digital approach was adopted (see Prag and Chartrand 2018), using the EpiDoc-XML encoding standard, which is a schema of the internationally recognised Text Encoding Initiative. Digital encoding of the texts and the information about the texts (the metadata) lays the foundations for systematic machine reading of the texts, and can be applied equally across all languages and categories of text, enabling cross-linguistic, cross-temporal and wide-ranging analysis of texts and objects at a wholly new level.

The I.Sicily project began from a foundation of metadata (bibliography and information about the inscriptions/inscribed objects) created between 2001 and 2004 for the stone inscriptions of ancient Sicily. The first phase of I.Sicily involved the transformation of that data into EpiDoc format, and the gradual incorporation of the texts, primarily through automated import and draft conversion to EpiDoc; a second phase has been underway for some time, focused upon the editing of that information and a rolling programme of identification and autopsy of the inscriptions themselves. The amount of work involved in phase two (identification, location and autopsy of over 3,000 inscriptions across the island) has meant that progress has been relatively slow, with work concentrated in Siracusa. As part of that work, new catalogues have been produced for Adrano and Halaesa museums, and new epigraphic exhibitions established at Halaesa and Catania; a partner project, EpiCUM, has produced an online catalogue and exhibition of the complete collection of the Catania Museo Civico. Over 600 inscriptions have already been studied at the Siracusa museum. 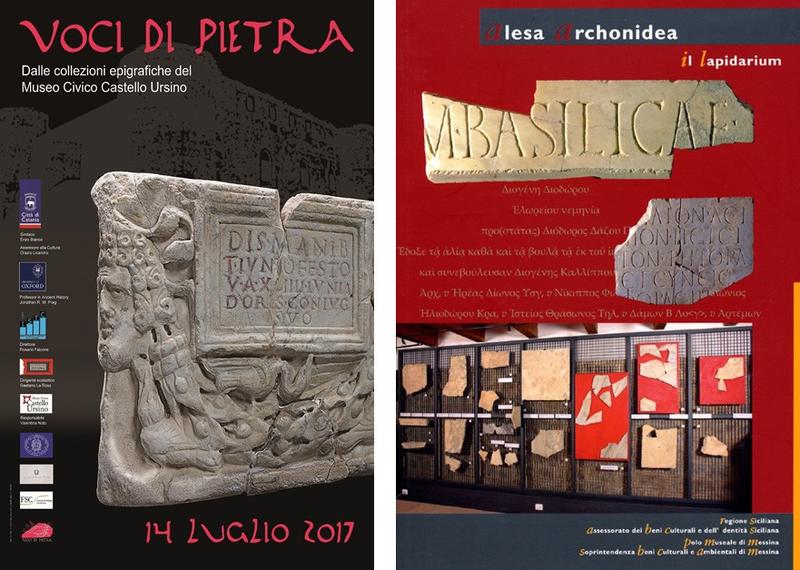 The exhibition poster for the opening of ‘Voci di Pietra’ at Catania; and the cover of the new catalogue for Halaesa, illustrating the newly opened ‘lapidarium’ at the site

The aim of the first phase of the Crossreads project is to complete this project – firstly by completing the initial editing and autopsy work of the existing I.Sicily material, and secondly by extending the coverage. That extension has two parts: identifying and including the missing inscriptions on stone (up to 1,000 in Siracusa, primarily from the city’s catacombs; but also material from excavations in Catania and elsewhere); and incorporating the non-lapidary material. The latter has a wide range and very little has ever been systematically gathered together: texts on metal, including curse tablets; texts on pottery, particularly the indigenous language material from the Archaic period; texts on other portable objects (known as instrumentum domesticum); and stamped texts on bricks, tiles and other objects. If possible, we will also include coin legends, as a category of textual material commonly passed over by epigraphic studies, but potentially of considerable value in areas such as the study of letter forms.

The I.Sicily corpus is online and available for consultation in its current state at any time.

You can read more about the I.Sicily project and find updates and related materials at the separate I.Sicily blog and website.