A new language in the epigraphic landscape of ancient Sicily

Phoenician, Punic, Elymian, Sikel, Greek, Oscan, Latin, Hebrew. This is our starting list of languages attested in the epigraphic evidence of ancient Sicily. We must now add a new language. This is the Libyan-Berber language, or rather the eastern dialect of this language, which seems to be traceable in some of the numerous inscriptions found in the Elymian site of Segesta, in the ancient waste dump of Grotta Vanella (de Cesare, and Serra, 2012). Situated on the high ground of Monte Barbaro, a few kilometres from the ancient Greek polis of Selinunte and the Phoenician city of Panormos (modern Palermo, fig.1), Segesta was one of the most important indigenous settlements in western Sicily – i.e. Elymian Sicily, according to the traditional division of indigenous Sicily into Elymian, Sikel and Sikan. 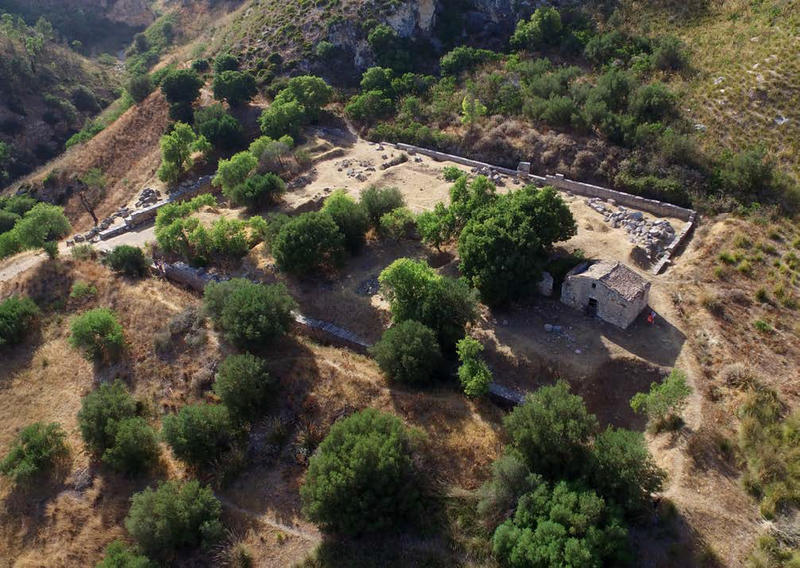 When you walk up the steep road to one of the two summits of Mount Barbaro today, you can immediately appreciate the significance of the site: despite the fact that only ruins remain, the imposing (albeit incomplete) Doric-style temple, the theatre and what remains of the bouleuterion and the agora (dating from the site’s most monumental phase, in the late Hellenistic period) they create the outline of once flourishing and populous polis (for a virtual tour of the Segesta archaeological park see Parco di Segesta). In the late archaic period this centre already boasted two or perhaps three sacred areas: the sanctuary at Contrada Mango (fig. 2), a temple whose foundations were found near the area of the bouleuterion, and a third sanctuary area located on the northern acropolis (fig. 3). Today, nothing remains of the latter, except for a huge dump of objects that were probably used for worshipping deities and which were thrown down the hill during a subsequent phase of reconstruction into the recess known today as ‘Grotta Vanella’. 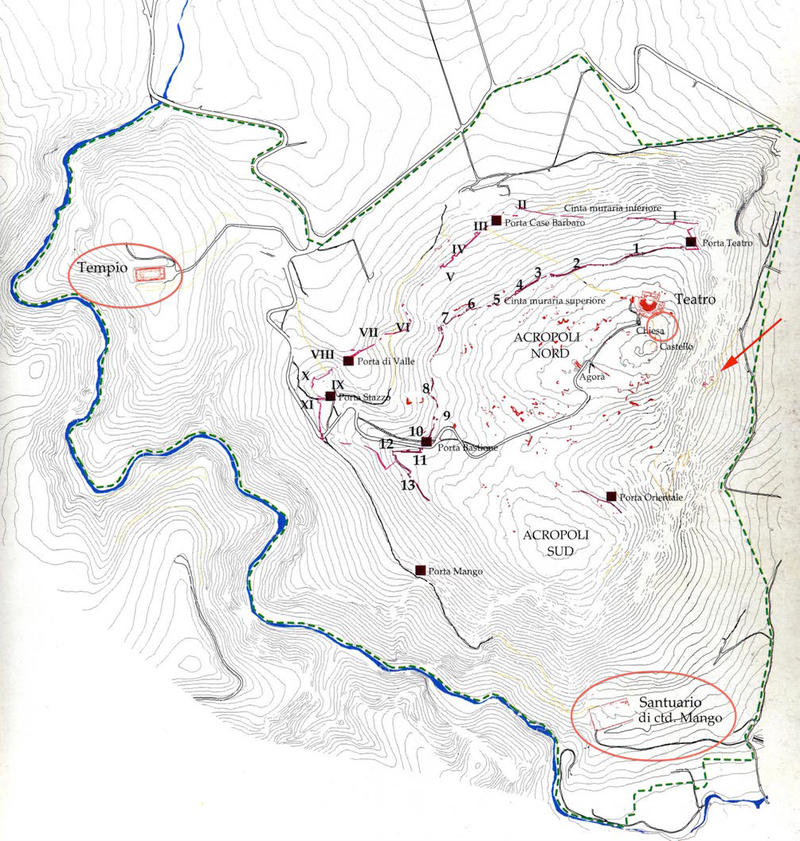 The sanctuary in question probably consisted of an open space on which wooden structures stood (see De Vido, forthcoming), this was one of the most important cultic centres of Late Archaic Sicily. It was possibly intended to host several deities and certainly a goddess, judging by the large proportion of material relating to the female sphere that have been retrieved from the dump (e.g. loom weights, one of which is even inscribed: cf. Agostiniani, de Cesare, Enegren Landenius, 2014). Out of some 30,000 fragments of vessels (mostly imported) and other material remains (bone, bronze and terracotta figurines) approximately 442 inscriptions were found, most of which were published in the late 1970s by Luciano Agostiniani (Iscrizioni anelleniche di Sicilia, vol.1). Most of these epigraphic documents are highly fragmentary - with the exception of a single intact vase (ISic020283). They consist of graffiti incised after firing on black-figure Attic pottery, or on local pottery (in smaller numbers) and can be dated between the end of the 6th and the beginning of the 5th century BC (on the pottery and dating, see Marchesini, 2012). Agostiniani assumed that most of the texts are in Elymian, an Italic language also attested in other centres of western Sicily, while some may be in Greek. However, these documents are often so fragmentary (fig. 4) that it is difficult to determine their linguistic identity. While surveying the graffiti in order to collect them in the ISicily corpus - in which they now appear as drafts - a couple of fragments in particular attracted my attention: ISic020288 (fig. 5) and 020307 (fig. 6), both because they were evidently engraved by the same hand and because of the hourglass grapheme above the rest of the inscription in ISic020307.

Recently, I came across the inscriptions from Grotta Regina, a cave above Mondello beach near Palermo where, according to the text of the inscriptions, there was a Punic sanctuary dedicated to chthonian and fertility deities. Among the Punic and Neo-Punic inscriptions found in the cave, Bishop Benedetto Rocco identified several Libyan inscriptions, probably dating from the middle of the 3rd century BC (Rocco, 1974); these merit a thorough re-investigation. Prompted by what was only my own initial speculative idea, I learned that in 1969 Michel Lejeune (Lejeune, 1969) had already hypothesised a Libyan origin for these two ‘Elymian’ inscriptions: in particular, he suggested they referenced two Libyan names transcribed in Greek characters (the first is not epigraphically attested but can be ascribed to Libyan-Berber onomastics; the other is known). In more recent years, René Rebuffat (Rebuffat, 2008) confirmed Lejeune’s hypothesis, contributing new evidence for this line of inquiry by reading other fragments from Grotta Vanella as probably Libyan. In short, what most attracted the attention of Lejeune, and later of Rebuffat, and what attracts mine today is the grapheme which in Libyan has the value of ‘S’ (the so-called hourglass, a sign little known in Sicilian epigraphy and not otherwise interpreted in Elymian epigraphy, fig. 7) and which has a function similar to the genitive of possession within the text and/or to an ownership mark when found in isolation. With the former function, it often featrures on funerary stelae, for example, together with the noun BN-S = ‘tomb, funerary monument of’ (fig. 8) or W-S = ‘son of’ or MT-S = ‘burial of’. As an ownership mark for a specific person, it appears in isolation, surmounting the stele (figs. 9-10), as if to indicate that the stele belongs to the deceased mentioned in the text of the epigraph. The same value, particularly in the presence of a Libyan name, seems to be ascribed to the ‘hourglass’ symbol which is found above the name incised on ISic020307 (fig. 6). Were this to be confirmed, both the name and the use of the hourglass sign would point towards the eastern Libyan dialect, from the area of Tunisia and north-eastern Algeria (fig. 11).

Could it be that two Libyan dedicators had the text written by the same officiant? Is this an isolated case, or are there other texts in the same language at Segesta and elsewhere in Sicily? And who were these Libyans: slaves, mercenaries (perhaps of Hamilcar defeated at Himera?), adventurers (a category often underestimated in long-distance mobility), or merchants? And which deity(ies) did they worship on the northern acropolis of Segesta? All these questions - or at least some of them - will be answered in a forthcoming article. What is certain is that we should not be surprised to find evidence of other North African presences (not simply Phoenician-Punic ones) in Sicily during the archaic and late archaic periods, and especially in the western part of the island, so closely connected to African routes. North of Africa was populated by many different peoples, some of whom are mentioned in Greek literary sources (see e.g. Herodotus’ Libyan accounts in 4.167-181 in which he names the Adyrmachidae, Giligamae, Asbystae, Auschisae, Bacales, Nasamones, Psylloi, Garamantes, Macae, Gindanes, Lotophagoi, Machlyes, Ausees as the nomadic Libyans who lived on the coast; see also Diod.Sic. 3.49.1). It was a land only partly under the rule of Carthage – and one which, moreover, brought together culturally and linguistically diverse populations.

Although this is evident from a historical point of view - just as it is evident that Sicily was not only populated by Greeks - we unconsciously tend to favour the history of what is better ‘known’, forgetting the great cultural and linguistic wealth that must have characterised this part of the Mediterranean and associating, in an interpretative short-circuit, all of North Africa with Carthage alone. These tantalising hints from ‘Elymian’ Segesta serve as a timely reminder to question such assumptions and simplistic readings.  This brief excursion to the corner of Sicily closest to Africa began with two damaged fragments of inscribed pottery found in a secondary deposition on the slopes of a mountain that was home to an important Elymian centre. The detailed analysis of these two texts has opened up a scene of mobility, exchange and mutual influence previously underestimated for the historical period in question. I have a hunch that we will find other languages here, and certainly other stories to tell... 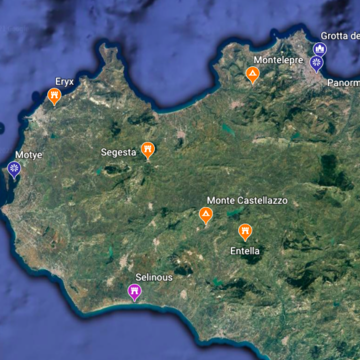 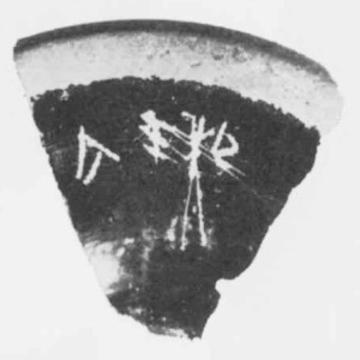 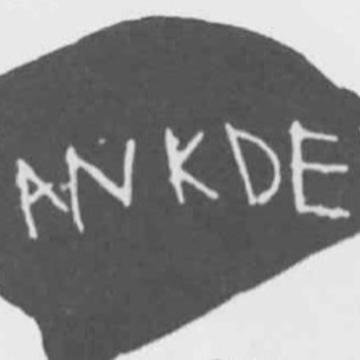 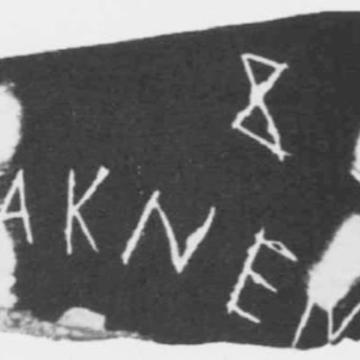 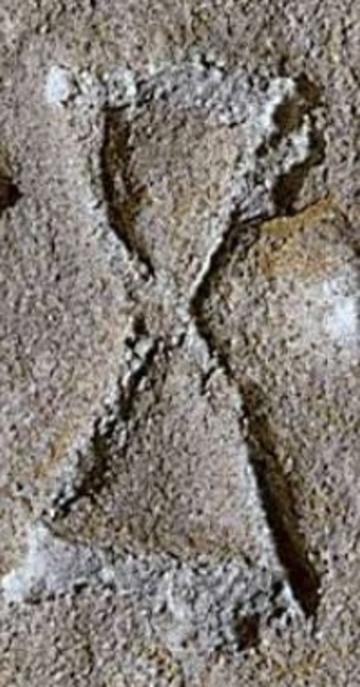 Fig. 7. ‘Hourglass sign’ on the stele of Dougga/Tbgg, Tunisia, C2 BCE (RIL 1). ©The Trustees of the British Museum. 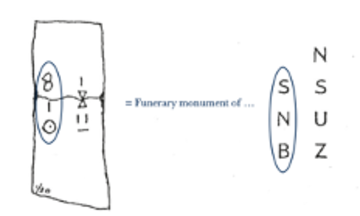 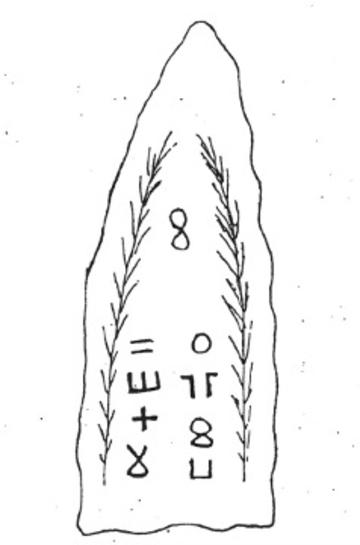 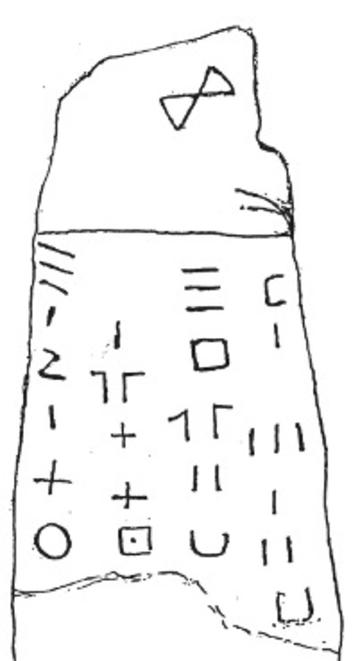