Building a corpus of Roman inscribed bronze seals in Sicily

Over the past twenty years epigraphic scholars have started to develop an increased interest in Roman bronze seals, signacula. These small objects are made up of a variably-shaped lamina, or printing plates (fig. 1), bearing an inscription (usually in relief letters and with a right-to-left orientation) and a handle, which is typically ring-shaped (fig. 2), and may feature a bezel containing figurative elements or letters (fig. 3).

Used to stamp documents and a broad range of different materials, signacula  came into use in the Roman Republic during the 2nd century BC, becoming both popular and widely used in many areas of everyday life during the imperial period. The most recent studies aim to enhance the potential of these objects to provide information relating not only to the ancient economy and administration of the res (property), both in the public and private sphere, but also through determining the identity and profile of signacula owners.

Until the early 2000s, our knowledge of the Sicilian context was mostly limited to the editions of the main nineteenth-century epigraphic corpora: Corpus Inscriptionum Latinarum (CIL) , vol. X part 2 (1883, Mommsen) and Inscriptiones Graecae Siciliae et Italiae volume XIV in the Berlin Inscriptiones Graecae (IG) project (1890, Kaibel).  Giacomo Manganaro authored the first catalogue of Timbri di bronzo in Sicilia ('Bronze seals in Sicily', 2006): a title that rightly protects him from the complex and often unsolvable problems concerning the provenance of these objects, whose mobility is greatly increased both by their small size as well as their function. Another essential basis for the study of the signacula in Sicily is Antonio Ferrua's volume in Epigraphica, 'Sigilli su calce nelle catacombe' (‘Seals on mortar in the catacombs’, 1986), which addresses the impressions left by signacula on the mortar of tomb-covers located in Roman and Sicilian catacombs. The habit of sealing, or decorating, the mortar of the tombs using signacula is documented for Sicily in the late-antique cemeteries of Syracuse, with significant comparisons only in Rome (Gradante forthcoming). These impressions not only expand the repertoire of epigraphic texts but enrich it with hard evidence of the presence and use of these artifacts on the island in antiquity.

In antiquity, the circulation of signacula within a specific territory was not an index of where the artifacts were originally produced. Their small size, the decision to make them from a noble material such as bronze (designed for long-lasting use), their function, and the close relationship with the owner, make the mobility of signacula in ancient times almost equivalent to that of their owners, or even greater, if we also consider the legal possibility of the inheritance of these objects, at least in certain circumstances and social environments. Consequently, the finds of impressions, or signacula, in archaeological contexts, whether funerary, manufacturing, or residential, offer valuable information about the material culture and the ethnic, social, and linguistic environment of the owners, living or operating in loco in a given historical period. However, the signacula providing these data are, in general, and no less for Sicily, in a minority compared to the numerous specimens recorded in the corpora, or kept in public and private collections. In these cases, it becomes important to pay close attention to the acquisition history, and the history of antiquarian collections in the region, including the main currents of the antiquarian market within and beyond the island, to recover further information on the provenance of the objects (fig. 4). 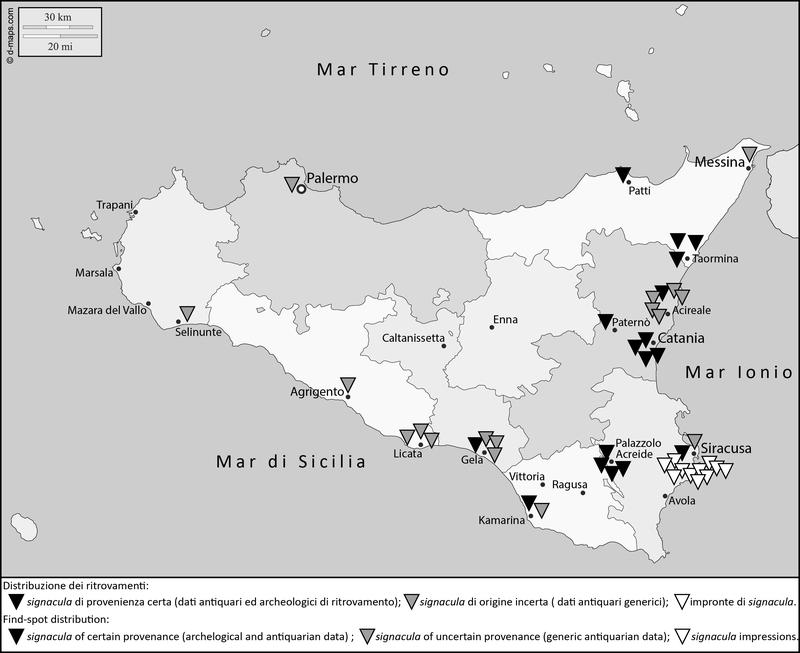 The main objective of my work on signacula is to provide the first complete and systematic catalogue of this class of instrumentum inscriptum for Sicily, in a critical edition supported, as far as possible, by autopsies of both artifacts and contexts and photographic documentation, thus providing a homogeneous documentary basis for future research (Gradante 2021 in press).

Compared to the sixty specimens recorded in the main sylloges (54 in CIL and 6 in IG) and the 55 reported by Manganaro, partially corresponding to those already published in CIL, amounting to a total of 97 signacula recorded prior to 2006, the updated corpus is now composed of 109 signacula (including 9 hitherto unpublished examples), as well as 12 impressions on mortar from the catacombs at Syracuse. The material, dated on the basis of palaeographic, prosopographic and archaeological analytical methods, covers a wide chronological span, between 2nd century BC and the 7th century AD.

Signacula  held in the Sicilian collections offer a broad range of at least 15 different shapes, together with some variations. Focusing on the physical characteristics of these artifacts, and creating typological classifications, does not merely respond only to a taxonomic need, but allows us to analyse, for instance, the potential relationship between the shape of the seal and specific functional requirements (Gradante 2021), or the demands imposed by the material properties of different res signata (the sealed object/document). More than this, shapes may either express specific needs for the self-representation of the owners, or trends which can be attributed to certain geographical areas, eras, and even workshops. Shapes can communicate symbolic, apotropaic or religious values, or be evocative of trades and actions linked to the gesture of stamping; not to mention the possible interactions with the textual content of the seals themselves.

In Sicily, rectangular lamina (fig. 1) prevail in quantitative terms, followed by circular lamina. Excluding these two geometric shapes, the most recurring type is that of the solea, the sandal sole, attested in different variants (fig. 5).Perfectly representative of the desire for customization, which progressively increased in the middle of the imperial period among signacula owners, is the eagle shaped lamina, chosen as an onomastic echo of the owner, whose cognomen, legible on the seal, is precisely Aquila (fig.6). The Caecilii, a family company, made an original choice of a lamina in the shape of a cargo ship, possibly with three crew members, potentially corresponding to the three persons mentioned in the text (fig. 7). In this case, the reference to the commercial activity of the owners, which probably involved the transport of goods by sea, seems pretty evident, but we also know of examples associated with Christian blessing formulas, for which it is legitimate to see the boats as being imbued with symbolic value, relating to the Christian idea of ​​salvation. But the religious meaning would not necessarily exclude a commercial use for the seal: the symbol, as well as the auspicious or blessing formula, assumes an apotropaic function for these artifacts, invoking divine protection for the stamped object, its contents (in the case of food containers) and certainly also for the people involved in various ways in these commercial activities.

The signaculum could be used by companies not only to make their products recognizable, or to seal documents, but also to convey promotional messages, as the Iunii company did, who claimed to have 'good wine'. Neutral auspicious formulas such as: 'life', 'health', 'joy', 'happiness', 'good/long life to all', 'luck'; or blessing formulas with a Christian connotation such as spes in Deo, ('hope in God'), vincet Deus ('God will triumph')  and the Greek equivalent, Christos Nika ('Christ conquers'), were evidently not used to mark property ownership, but rather to imbue property with divine protection, with a wish for health and happiness being clearly addressed to the recipients. In these cases, we can suppose a purpose for the signacula of stamping perishable and edible products, such as bread offerings in convivial contexts – banquets, weddings, or even Eucharist rites – in keeping with a tradition that has remained virtually unchanged for millennia (fig. 9), as we can see in this modern Greek example of a prosphoron (liturgical offering bread).

In fact, since we are still exploring the multiple ways in which these artifacts were used in numerous aspects of ancient daily life, the ongoing discoveries of signacula and impressions in Sicilian archaeological contexts promise to develop our understanding of their use. But that is another story, to be saved for another day. 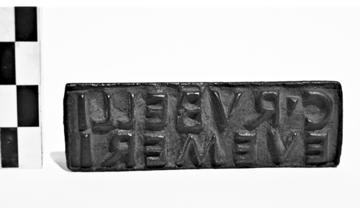 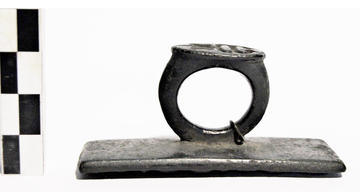 Fig. 2: As above, showing the ring-shaped handle with bezel. 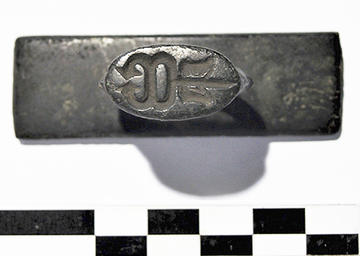 Fig.3. As above, detail of the bezel featuring a stamp of a caduceus 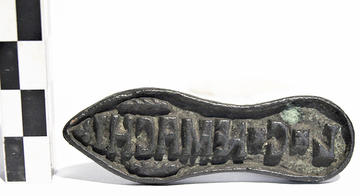 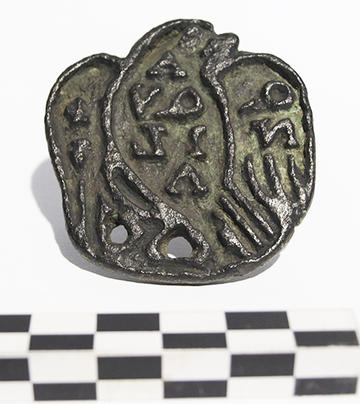 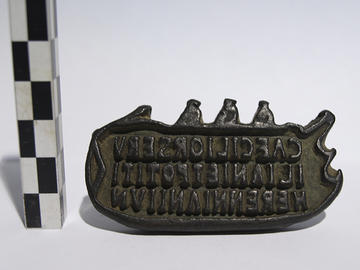 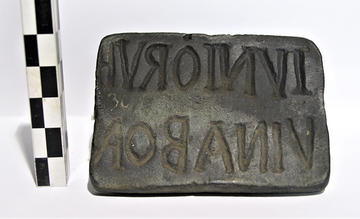 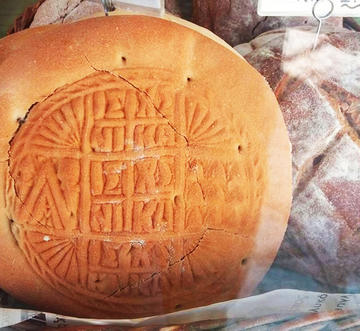